Thermal Efficiency - How OpenShutters help insulate your home and your wallet 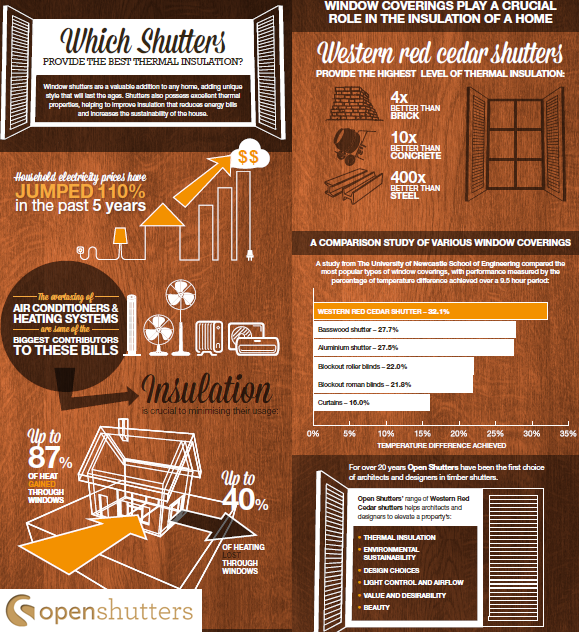 Shutters are often utilised as environmental moderators between inside and out. Suitable for a variety of climates, shutters are ideal at preventing solar heat gain in summer whilst still allowing light or air to enter the space, and providing an extra layer of insulation in winter. Up to 87 per cent of heat can be gained through the windows of a home and 40 per cent of a heat can be lost in the same way, which means that window coverings are crucial to insulate a home and minimise our dependency on mechanical ventilation. However, while any type of shutter will do something to keep heat out in summer and heat in in winter, the materials a shutter is made of does have a significant impact on its ability to insulate.

Here at OpenShutters, we recommend Western Red Cedar for its durability, appearance and environmental characteristics, as well as its proven potential for insulating your home. In fact, Western Red Cedar provides the highest level of thermal insulation compared to brick, concrete and steel. Additionally, when compared to other kinds of shutters, Western Red Cedar maintained its number one status when measuring the temperature difference measured between inside and out over a 9.5 hour period. It managed to achieve a 32.1 per cent difference, meaning that it’s cutting heat gain or loss indoors by almost a third – 4.4 per cent greater than its closest competitor, basswood shutters, and more than twice as great as curtains alone.

The reason for this is due to the inherent make up of Western Red Cedar, with its low-density cellular structure creating air spaces that make it the best insulator of any available softwood.

Get in touch with us to discuss the best options for your home.

Your email is never published